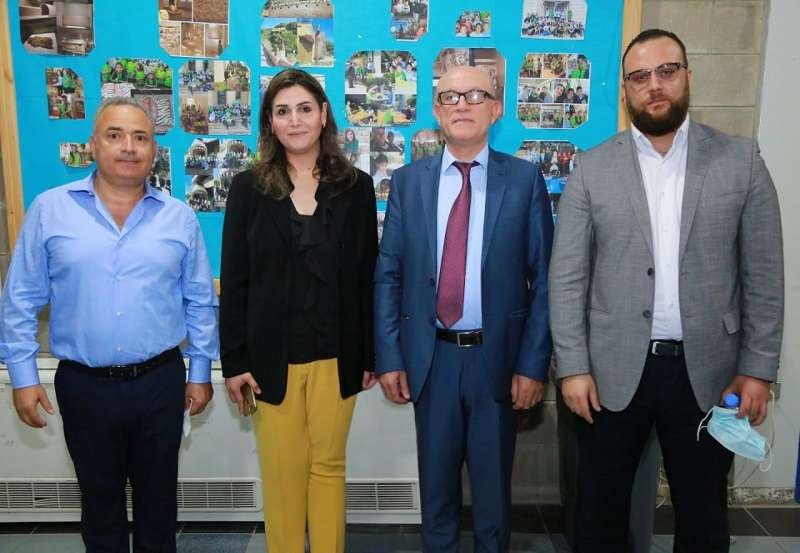 Al-Manar Modern School - Ras El-Matn – has organized in the presence of the President of the Union of Municipalities of Upper Matn and the president of the municipality in Ras El-Matn, Mr. Marwan Salha, the President of the Educational Center for Research and Development, Mr. George Nohra, his advisor, Dr. Jihad Saliba, the former advisor to the Minister of Education, Dr. Nader Hudaifi, and a selection of educational members, researchers, university professors, principals and school teachers, and heads of NGOs, an educational meeting to share their effective experience in promoting a culture to enhance “ Value Based Leadership” in the school environment in partnership with the “Transformation Lebanon Initiative”, on Friday, June 4, 2021, in the theater hall - the campus of Al-Manar Modern School.
The principal of Al-Manar Modern School, Dr. Jinan Karameh Shayya eagerly welcomed the audience and mentioned the challenges of educators in enhancing students' motivation to learn, due to their loss of hope and belief in themselves and their ability to advance and change. She also described the constant suffering of establishing values in the minds and hearts of students due to the scarcity of good role models. As a result, only three months ago, in partnership with the “Transformation Lebanon Initiative” and its founder, Ms. Seddiqa Kebi, the school launched three clubs to implement “Value Based Leadership” training with secondary school students, with students’ families, and with graduates. Now, Al-Manar Modern School has about forty facilitators, from students, parents and graduates, who are ready to train others to become good role models and facilitating leaders. Currently, they train other students from the age of eight years and above and train other parents to comprehensively invade the culture of values in the school environment, and then society until it reaches all parts of the country with the cooperation of everyone.
In turn, Ms. Seddiqa Kebbi, founder of the “Transformation Lebanon Initiative” and Executive Director of John Maxwell organization, explained the importance of the “Value Based leadership” training strategy in changing countries by promoting values for all citizens, as she shared her effective experience with the John Maxwell team in Paraguay and Guatemala and others.
The students of Al-Manar Modern School presented the “Value Based leadership” training strategy, and witnessed the strong impact of these trainings on their thoughts and behaviors. Ms. Amal Al-Maghraby, President of Themarona Association for Learning Difficulties, also described the effectiveness of implementing this strategy, in cooperation with Dr. Karameh Shayya and Ms. Kebbi, with her students who, despite the challenges, showed passion and enthusiasm for continuing the exercises and presented a noticeable change in their behaviour. Mrs. Nour Abu Shaheen and Mrs. Jamal Al-Khatib also represented the mothers who underwent the training, in presenting the impact of this strategy on the family atmosphere and the self-development of them and their children. The parents expressed their appreciation for this training and for the support of the school principal to them by presenting an honorary trophy to her.
The President of the Educational Center for Research and Development, Mr. George Nohra, praised the efforts made at Al-Manar Modern School, saying that after all he heard about “Value Based Leadership”, he will consider it the first step in developing the new curricula that the Educational Center for Research and Development began working on since March. He considered that the educational thought that was presented at Al-Manar Modern School will leave a positive imprint on the national level that will change all concepts and standards. Moreover, he confirmed that he is strengthening networking and partnerships with all educators, national and private schools and universities in the new curricula project, and promised that he will communicate with Mrs. Kibbi in the future to achieve their goals.