Clean Up The Med 2020... a No-Borders Involvement to Reduce Marine Litter 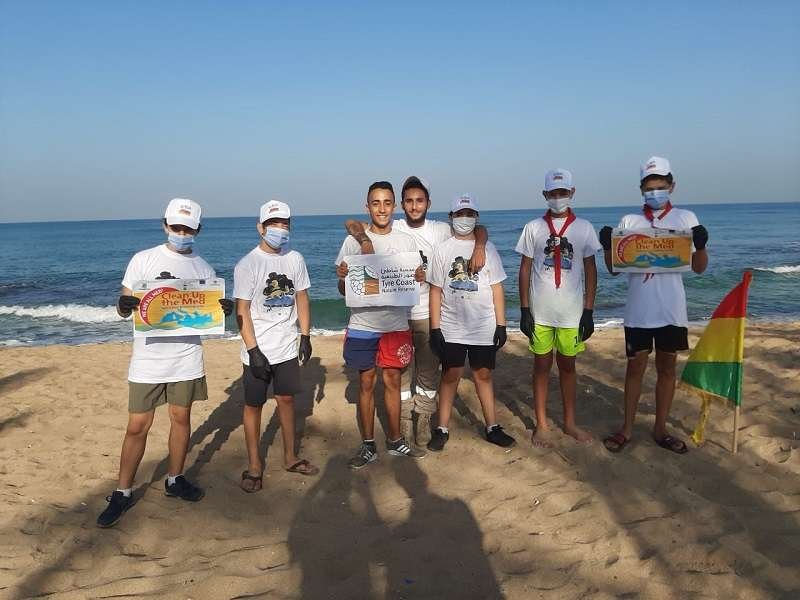 Over 115 participants in the first edition of the beach cleaning campaign promoted by Eu-funded COMMON project, extended to the whole Mediterranean, under the title "Clean Up The Med 2020, a no-borders involvement to reduce marine litter". More than 620 kg of waste collected from 4 different zones in Tyre and at Al Aqaba beaches and the Eastern shores of Dead Sea in Jordan, of which over 80% is plastic.

A united Mediterranean in the fight against marine litter

From Tyre port, TCNR beach-south of Tyre city, Al Rashidiye beach located in the middle of TCNR, Al Mansouri beach, to Al Aqabah beaches and the Eastern shores of the Dead Sea, over 115 people, armed with bags and gloves, took part in the appointment on the beaches of Tyre and southern Tyre beaches with a single goal: to clean them and fight for a cleaner sea.
Clean Up The Med, Legambiente's awareness campaign on sustainable management and marine litter reduction, returned from 25 to 27 September for a weekend of mobilization that involved associations, organizations, schools, scouts, professional divers and citizens. A great environmental volunteer initiative promoted this year by COMMON (COastal Management and Monitoring Network for tackling marine litter in Mediterranean sea), a European project funded by Eni CBC Med that involves Italy, Lebanon and Tunisia with the aim of protecting the coasts of the Mediterranean from the marine litter through sustainable management.
This year, at the end of a summer marked by a health emergency, on 27 September 2020, at 7:00 am, 8 organizations from Tyre region, and one organization from Jordan joined the initiative: Al Afaaq Institute for Development – Vocational Training division; Al Afaak institute; Tyre second public school; Rotaract Tyre – Europa; Thought and Human Association; Al Jaleel organization for development; Al Risala scouts, Lebanon diving centre; and the Development for people and nature Jordan association. Over 25 kilometres of beach cleaned of waste, which show how the problem of neglect and bad disposal is common to the whole Mediterranean Sea: to the disposable plastic bottles, ubiquitous and found in large quantities on the beaten coasts, are added glass bottles, cigarette butts, metal, textiles and worked wood. There is no shortage of gloves, masks and health devices related to the COVID-19 emergency.
Overall, over 115 volunteers, aged 8 to 65, participated in the campaign, including children, school students, organizations, associations, scouts and divers. The initiative was carried out in compliance with the protocols provided for by the COVID-19 emergency. The cleaning activities took place mainly on beaches located near urban centres and led to the collection of over 97 bags of waste, more than 620 kg in total.
Over 80% of the waste found is made up of plastic: first of all, plastic water bottles, followed by glasses, cigarette butts, plastic bottle caps, metal, textiles and worked wood.
The data that emerged from Clean Up The Med are in line with what was reported by tourists and residents in Mediterranean coastal areas who took part in the BEach CLEAN survey, a questionnaire on waste management promoted by the COMMON project and aimed mainly at strengthening the link between tourists and bathing establishments with a view to sustainability. 20 responses were collected from tourists and residents in Tyre city. Also in this case, the most commonly found waste are plastic water bottles, followed by glasses, cigarette butts, plastic bottle caps, metal, textiles and worked wood.
90% of respondents noted the absence of sorting waste, and only 10 % said they always take care to dispose them off correctly.
In addition to the lack of individual attention, there is a need to strengthen local and national awareness-raising actions and policies aimed at reducing marine litter: 90% of respondents say they are not always careful to separate waste. Finally, 80% think that collection baskets along the beaches are not enough.

The COMMON project involves Legambiente, the University of Siena, the National Institute of Marine Sciences and Technologies in Tunis, CIHEAM Bari, the Lebanese NGO Amwaj of the Environment, the University of Sousse and the Tyre Coast Nature Reserve. The common goal is the reduction of marine litter in 5 pilot areas, planning the use and monitoring of resources, with the ambition of testing a model potentially transferable to the entire Mediterranean basin.