Carbon in the Cryosphere and Carbon Isotope Fractionation 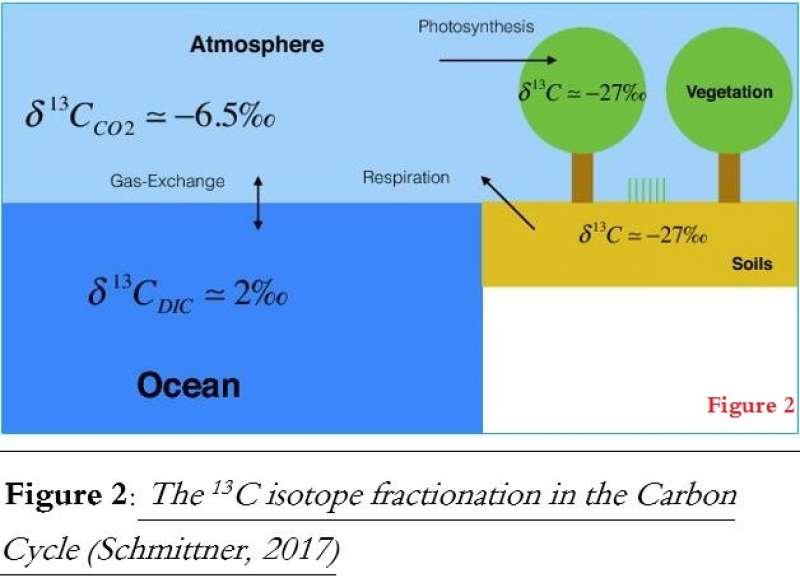 
The Carbon Biogeochemical Cycle in a Warming World (Article 3)

An article series by Hadi Issa

Deep in the hearts of stars, the basic chemical elements supporting life were first formed from hydrogen and helium, including carbon, nitrogen, and oxygen, contributing to the formation of celestial bodies in the solar system – the orbiting planets of Solar Nebula, including Earth. When the Earth was formed, it was covered with a hot liquid of molten minerals, known as magma. Meanwhile, magma started erupting as volcanoes, releasing gases to the atmosphere, including water vapor, nitrogen, carbon dioxide, and sulfur dioxide, forming the Earth’s atmosphere. Consequently, clouds started appearing, and heavy rain started falling, thus the Earth’s hydrosphere was formed. Afterwards, volcanoes started erupting again in the form of lava that, under cooling conditions, crystallized and formed igneous rocks, and under weathering, igneous rocks were transformed to sedimentary rocks, and later, under heat and pressure beneath the Earth’s surface, to metamorphic rocks, in a perpetual rock cycle, hence the Earth’s lithosphere was formed, and the biogeochemical cycling of chemical elements started, giving rise to life-incubating conditions.

As an essentially closed system, the Earth has a finite amount of matter. The availability of some nutrients, however, is vital for the continuity of life; therefore, those nutrients flow through continuous cycles between Earth’s subsystems, aka spheres, and from one reservoir to another, as part of the planet’s life-driving biogeochemical system. According to the law of conservation of mass – discovered by Russian scientist Mikhail Lomonosov in the mid-eighteenth century – in a closed system, matter can neither be created nor destroyed, in which both mass and energy remain constant. Mass and energy, however, undergo various physical and chemical changes that have no influence over their overall quantity in the system.

The natural processes influencing the dynamics of the carbon cycle include chemical reactions in the atmosphere, biological processes in the biosphere (respiration, photosynthesis, and decomposition), weathering and deposition of rocks along the lithosphere, and various processes in the hydrosphere (including transport, uptake, chemical reactions, and precipitation). Moreover, human activity is affecting the cycle through anthropogenic practices, mainly industrial carbon emissions that are increasing the greenhouse effect above the permissible levels, intensifying ocean acidification, and bringing up multiple pollution-related illnesses.

Article 3: Carbon in the Cryosphere and Carbon Isotope Fractionation

Carbon in the Cryosphere

Being the frozen, icy part of the hydrosphere, the cryosphere is one of the most subsystems on Earth that are sensitive to changes in the climate, and thereby carbon emissions. Potable water – water that’s suitable for human consumption – is non-salty, aka fresh water. While only about 3% of water on Earth is fresh water, about 70% of it is frozen. Terrestrially, frozen water can be found in the form of glaciers, permafrost, ice-sheets, and snow, whereas in water bodies, for instance, the Arctic Ocean, it appears in the form of sea ice, including ice-shelves and icebergs.

As the Arctic’s temperatures are rising, the amount of sea ice floating on it is shrinking, which is adversely affecting the habitats of several marine animals, including polar bears and walruses. Also, the rise of sea levels resulting from melting ice is impacting areas of coastal zones through water floods, including coastal regions of India, Bangladesh, China, Japan, Netherlands, Thailand, Egypt, Indonesia, Vietnam, and the US, exposing the populations’ assets and driving population-displacement. Another role played by ice in climate regulation is its high reflectivity due to its white color, allowing it to reflect incoming sun radiation and help regulating the Earth’s temperatures. However, as the amounts of ice are shrinking, less radiation is being reflected back to space, which is, furthermore, giving global warming a hand.

Acting like a conveyor belt, ocean currents around the world are driven by the level of saltiness, so as sea ice is melting, the level of saltiness is changing, disrupting the overall flow of the currents.  The conveyor belt, however, is a main source of nutrition for various species of marine animals, including fish and plankton, and in turn, has a considerable effect on the amount of oxygen generated by phytoplankton and other aquatic plant species – about 70% of oxygen on Earth is generated in the ocean (Carbon Brief, 2011). The cryosphere, under relatively warm conditions, can also be a source of atmospheric carbon. Permafrost – the part of the cryosphere that’s composed of soil and rock layers that have been frozen for long periods of time – is home to microorganisms that would keep them alive for millions of years. As the ice is melting, microbiological decomposition of organic matter is being catalyzed, furthermore, releasing greenhouse gases to the atmosphere, accompanied with disease-carrying viruses that has been stored in the soil for thousands of years.

Isotopes are nuclides of the same element, with the same atomic (proton) number, but different neutron number, and consequently different mass number.

Isotope fractionation is the analysis of how different isotopes of the same element are distributed in the environment, by conducting a comparison between isotopic ratios in various ecosystems (heavy/light isotopes). This is a useful tool in Earth science (geoscience) that helps scientists grasp a better understanding of natural and environmental systems; it acts as an indicator of the environmental conditions in a specific ecosystem, during a specific period of time and can also be used as a tracer to track the movement of certain chemicals.

Throughout the carbon cycle, active exchange of carbon compounds in the form of CO2 and CH4 takes place in the Earth’s biosphere and geosphere (atmosphere, lithosphere, hydrospherCe, and cryosphere).

here are two stable isotopes of carbon that are commonly found in nature: 12C and 13C. The isotopic composition of carbon compounds is usually expressed with respect to enrichment or depletion of the heavier isotope, 13C. The 13C/12C (heavy to light isotopes) ratio is generally denoted as Ᵹ13C. The variation of Ᵹ13C depends on the sources of carbon compounds, in addition to the processes and reactions they undergo.

Usually, biological activities favor 12C; the result in such scenarios would be an environment that is depleted in 12C and enriched in 13C. Therefore, the enrichment of organic matter has a great influence over the Ᵹ13C ratio in the environment at which the organic matter exist.

Figure 2A: Variation of the Ᵹ13C ratio in the marine environment

As a consequence of fossil fuel and biomass combustion, the abundance of 13C in atmospheric CO2 has decreased by about 1.5%, from -6.5% to -8%.

During photosynthesis, plants utilize electromagnetic radiation coming from the sun, in addition to carbon dioxide in the atmosphere, to produce carbohydrates as a source of energy. The chemical and biochemical light-independent reactions and processes involved in converting carbon dioxide to glucose form a cycle known as the Calvin cycle. In terms of carbon fixation, plants are divided into three categories: C3 in which carbon compounds are of three molecules, C4 in which carbon compounds are initially of four molecules and then split into three-molecule compounds throughout the Calvin cycle, and CAM which is similar to C4 plants with a slight difference in the timing of the process; CAM plants capture carbon dioxide of four-molecules at night and store it until daylight. Carbon uptake by C3 plants involves a Ᵹ13C ratio of about 20%; the difference between atmospheric CO2 (-8%) and plant biomass (- 28%), whereas it’s a 5% net fractionation for C4 and CAM plants.

On a global scale, the organic matter in soil globally contains several fold more carbon than either the atmosphere or living plant biomass; it’s also ordinarily slightly more enriched in the 13C isotope. The exchange of CO2 between the atmosphere and the surface of the ocean involves a Ᵹ13C ratio of 1-2%. However, the uptake of carbon by marine organisms through planktonic photosynthesis involves a Ᵹ13C ratio falling between -19% and -24%.

Figure 2: The 13C isotope fractionation in the Carbon Cycle (Schmittner, 2017)

The Ᵹ13C ratio varies in fresh waters depending on the sources of carbon compounds. These sources include carbonate rock weathering, mineral springs, atmospheric CO2, and organism respiration.

The isotopic ratios of carbon can also be used in radiometric dating (radiocarbon dating) for estimating the ages of fossils. This process involves the estimation of the isotopic concentration of 14C, a radioactive isotope in carbon compounds. When organisms are alive, they take in carbon from the atmosphere (mainly through photosynthesis), however, after these organisms die, the radioactive carbon content of their anatomical structures (14C) starts decaying into the nitrogen isotope 14N whilst they are being integrated into fossils; the half-life of carbon-to-nitrogen decay rate is 5730 years; therefore, a fossil's age can then be estimated by measuring the remaining carbon content.

The 14C isotope is continuously being produced through the bombardment of nitrogen in the atmosphere by neutrons coming from the sun as follows:

Upon the biodegradation of organic matter, the 14C content starts decaying to 14N according to the following nuclear reaction: